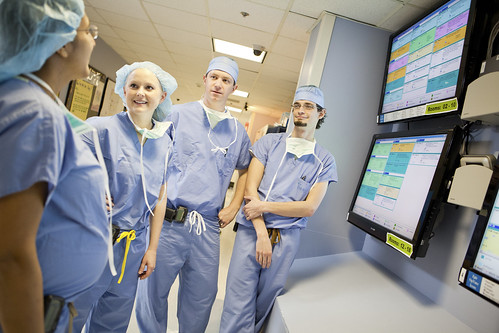 A new study from the Center for Healthcare Research & Transformation, a nonprofit partnership between BCBSM and the University of Michigan Health System, that finds wide variation in how providers treat coronary artery disease in different parts of the state has gained attention from the national news media.

The study, Variation in Interventional Cardiac Care in Michigan, focused on treatment methods for stable, non-emergency coronary disease — specifically, the rates of bypass surgery and angioplasty (stents) among patients with BCBSM insurance. It found that while overall rates for the two procedures dropped 19 percent between 1997 and 2008, regional variation rose considerably.

The findings raise concerns about the appropriate use of these high-risk, high-cost procedures in elective, non life-threatening situations when treatments like medication, diet or exercise may be more appropriate.

Here’s a roundup of news coverage:

This is a pretty common story in American medicine right now: A 2008 Congressional Budget Office report estimated that new technologies account for about half of the growth in health care costs. And some do indeed make us healthier: The rise of minimally invasive surgical equipment, for example, has cut the health risks and recovery time for undergoing surgery.

But some may just make healthcare more expensive — without delivering better health outcomes. And that’s not just true for catheterization labs: Another study this year looked at how this happens with prostate cancer treatments. Doctors with access to pricier proton therapies tend to use it more, even though its outcomes have proven no better than less-expensive radiation treatments. (Washington Post)

The findings suggest that areas with more cardiac catheterization labs — places where patients are diagnosed for heart problems — tended to have more interventions.

Marianne Udow-Phillips, director of the research center, said that many of these labs are in facilities that also perform angioplasties. “What happens is when they’re on the table, people are anesthesized, the doctors come out and say to the spouse ‘there’s an indication of a need and we can do it right now,'” she said. “So in many cases, they’re done right then in the cath lab without the benefit of the patients having the opportunity to reflect on the risks and opportunity.” (NPR)

Lansing-area cardiologists attribute the region’s decline in procedures partly to healthier lifestyles, including a decline in smoking rates. But they add that cardiologists in other regions may be more aggressively encouraging patients to undergo angioplasties to treat underlying conditions that are not immediately life threatening.

Using statin drugs and other medications can be just as effective and less invasive in treating these stable patients, said Dr. Joel Cohn, medical director of the Heart and Vascular Center at Sparrow Hospital in Lansing. (Lansing State Journal)

That kind of variation can add cost and is a concern if it’s not the result of patient characteristics but instead stems from patients not fully understanding the risks of invasive versus non-invasive treatments, Udow-Phillips said. Treating a heart patient with an elective angioplasty costs about $35,000, versus $25,000 for medical treatments, she said. (MiBiz)

by Sven Gustafson
Topics: Community, For You, Cost of Care