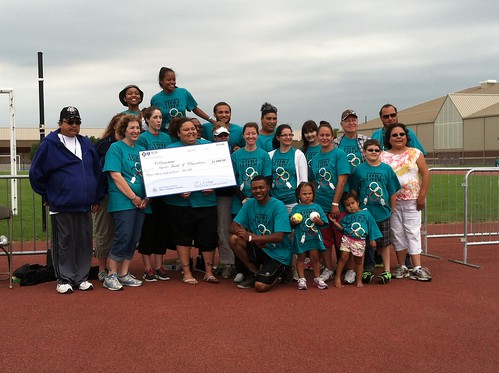 The Nottawaseppi Huron Band of Potawatomi the winning tribe tracking the highest average miles of physical activity per participant.

The incentive-based wellness competition encouraged members of Michigan’s federally-recognized tribal communities and Native American support organizations in a competition to determine which team could log the most miles of physical activity. Tribal communities completing the challenge received grants from BCBSM to support health and wellness programs in their communities.

The original Tribe to Tribe Walking Challenge was issued seven years ago by the Grand Traverse Band of Ottawa and Chippewa Indians to neighboring tribes for yearly “bragging rights” in physical activity leadership.  2013 marked the second year of the Tribe to Tribe and Blues Community Challenge program, the result of a partnership between BCBSM, the Inter –Tribal Council of Michigan and Grand Traverse Band of Ottawa and Chippewa Indians.  The program began with the shared goals of increasing overall participation and incentivizing participants in the program to help keep individuals motivated in continuing, and increasing, their regular levels of physical activity.

To fulfill the requirements of the competition, members of each team logged their daily physical activity through the BCBSM Blues WalkingWorks ™ online tracking tool, with the team goal of having the highest average miles achieved per participant.

More than 550 tribal members throughout Michigan registered for this year’s challenge, marking the highest participation levels in the contest’s seven-year history. At the end of the challenge, nearly 90,000 miles were logged by the participants, the equivalent of 3,397 completed marathons.

“Partnering this year with these 10 tribes for the Tribe to Tribe and Blues Community Challenge program has been a truly wonderful experience,” said Shelley DuFort, senior community liaison for BCBSM.  “It was exciting to see so many people engaged in the program and making commitments to get active and either begin or expand upon their healthy lifestyle behaviors. Even more inspiring was witnessing enthusiastic participants challenge themselves and reach out to encourage others to get involved. I expect this challenge will only continue to grow in its reach and scope in the future, and participating tribal communities build upon their impressive progress in their journey toward better health.”