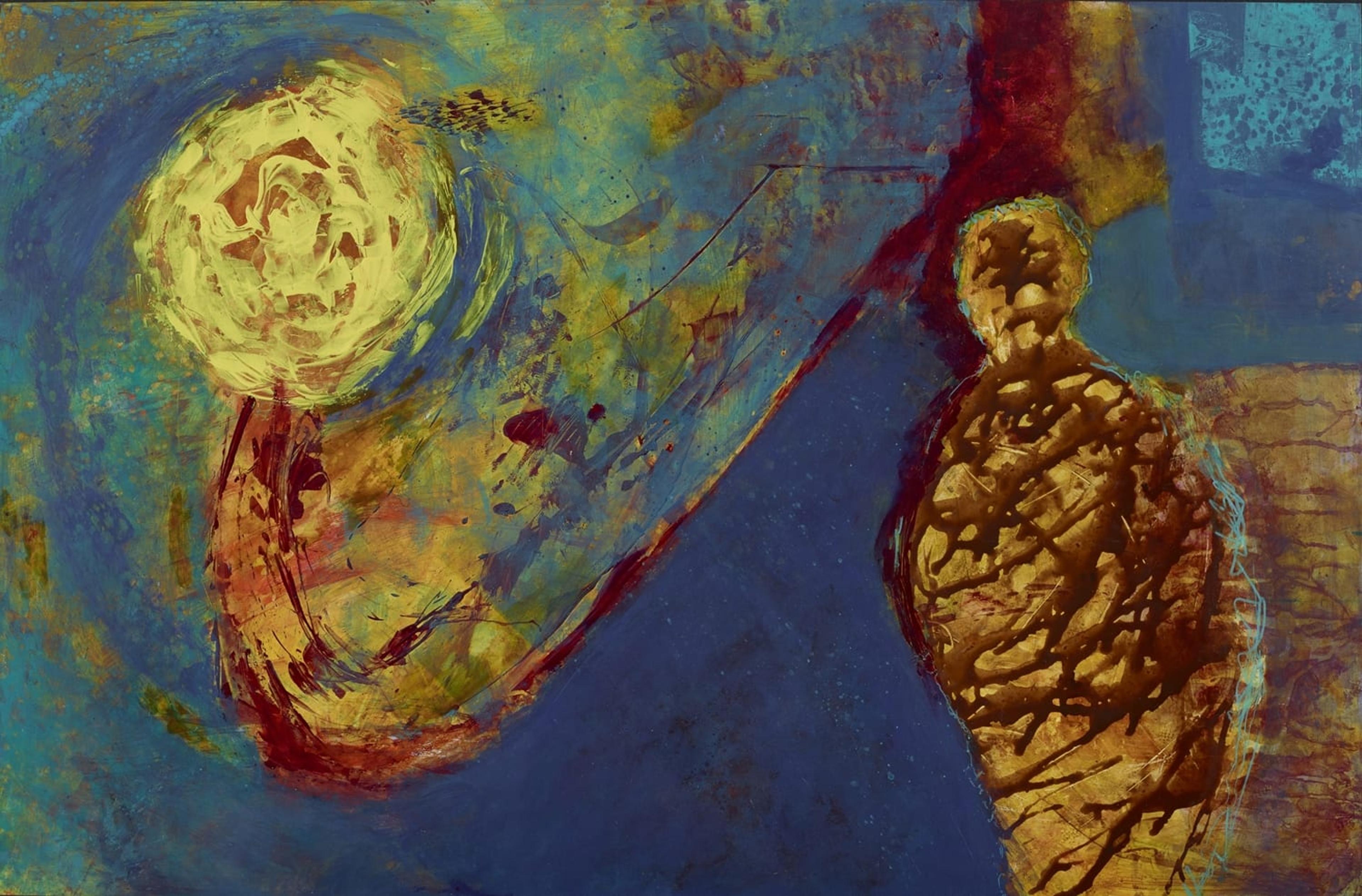 Huntington’s disease can be a cruel affliction for those affected and their families. The progressive disorder can cause uncontrolled movements, cognitive devolution and psychiatric disturbances in patients. There is no cure and people who are diagnosed often live for years as their bodies and minds decline.
Kathy Gibson Kathy Gibson cared for her sister, Kelly, from her diagnosis in 1997 through her death in 2014. Gibson dealt with her emotions from the experience by painting and creating art that reflected her sister’s journey with the disease and the struggles she faced as a caregiver. Four of her mixed-media pieces will be displayed at Blue Cross Blue Shield of Michigan’s downtown Grand Rapids headquarters during this year’s ArtPrize competition, which takes place Wednesday, Sept. 20 through Sunday, Oct. 8. “Eyes of Huntington’s” is Gibson’s first ArtPrize entry. It’s markedly different from the usual East Coast seascape paintings she’s created for years. “This has been my passion since my sister passed away three years ago,” Gibson explained.
"The Diagnosis" Each piece represents a different part of the journey. “The Diagnosis” feels disjointed, which is exactly how it felt when Gibson sat in a doctor’s office with her sister, then in her early 30s, and heard the shocking, “heart-stopping” news. “Everything just stood still for both of us and I saw on her face what was happening within her,” Gibson said. “I think her heart must have stopped because there is no cure.” Their father had passed away in the mid-1980s from Huntington’s disease, but the women didn’t know that’s what he’d had at the time. Their brother was a physician and he was made aware of the diagnosis, but it wasn’t something he shared with his sisters. He eventually succumbed to the disease as well. Gibson, the elder sister by 16 years, and her husband took Kelly into their home. Their adult children had already graduated college and the couple were ready to enjoy their empty nest. “We were ready for smooth sailing,” she said. “Well, God had other plans.”
"The Caregiver" Taking care of her sister brought with it a lot of resentment and anger, something Gibson is very honest about. She explains that it was hard to find balance, a theme reflected in the second work in the series, “The Caregiver.” The mixed-media piece represents the significance and priority her sister took in her life. “My thoughts were always about her,” she said. Painting and creating art has helped her deal with some of the emotions she felt around caregiving for such a long period of time. “Guilt is a heavy coat to bear,” Gibson said and she’s hopeful that others will see their caregiving struggles represented through her artwork.
"The Sun or the Shroud" “The Sun or the Shroud” depicts a turning point in Gibson’s experience. She made the conscious choice to make the rest of her sister’s living days joyful, choosing the proverbial sun over treating her sister as though she were dying, the shroud. “It’s very hard to see a person, to look in their eyes and see that they are looking, but not looking back at you because the voices in their head are really what’s front and center and what she was listening to,” Gibson said. Her sister struggled through schizophrenic episodes, depression and suicidal tendencies. Her cognitive functions declined to a point that only the most basic communication was possible. Gibson often used her sister’s love of dogs as a way to communicate, showing her pictures from a book about different breeds and having conversations about them. Constant involuntary movements and difficulty with chewing and swallowing meant Kelly had a hard time keeping weight on.
"New Rx" Taking part in a drug trial for a medication that is now actually prescribed to Huntington’s patients to help control movements was a bright spot in Kelly’s journey and one Gibson depicts in “New Rx”. Even though a cure wasn’t found in her lifetime, Gibson said her sister’s ability to help people diagnosed after her brought her immense satisfaction and purpose. “It still holds true that with each new drug, there’s new hope,” Gibson said. Ultimately, Gibson calls her sister’s journey heroic and wouldn’t trade her caregiving years for anything. If you’re visiting ArtPrize, make sure to check out Gibson’s work at Blue Cross’ downtown Grand Rapids location at 86 Monroe Center NW. She plans to be present at the display daily during ArtPrize from noon to 4 p.m., including weekends. She will not be available on Tuesday, Sept. 26. If you enjoyed this post, you might also like:

Thank you so much for this beautiful article and equally beautiful artwork. I’m curious about the potential for allowing possibility and hope exist in the world of Huntington’s disease. How do people with the disease and their caregivers hold space for possibility?

Thanks for your feedback, Paul! We appreciate it.

Good article about a tough situation and the beauty that can come of things, Julie. I saw the paintings in the window yesterday, and your writing certainly added some depth to what I thought was already really nice work.