For You, Community, Southeast Michigan, Stories 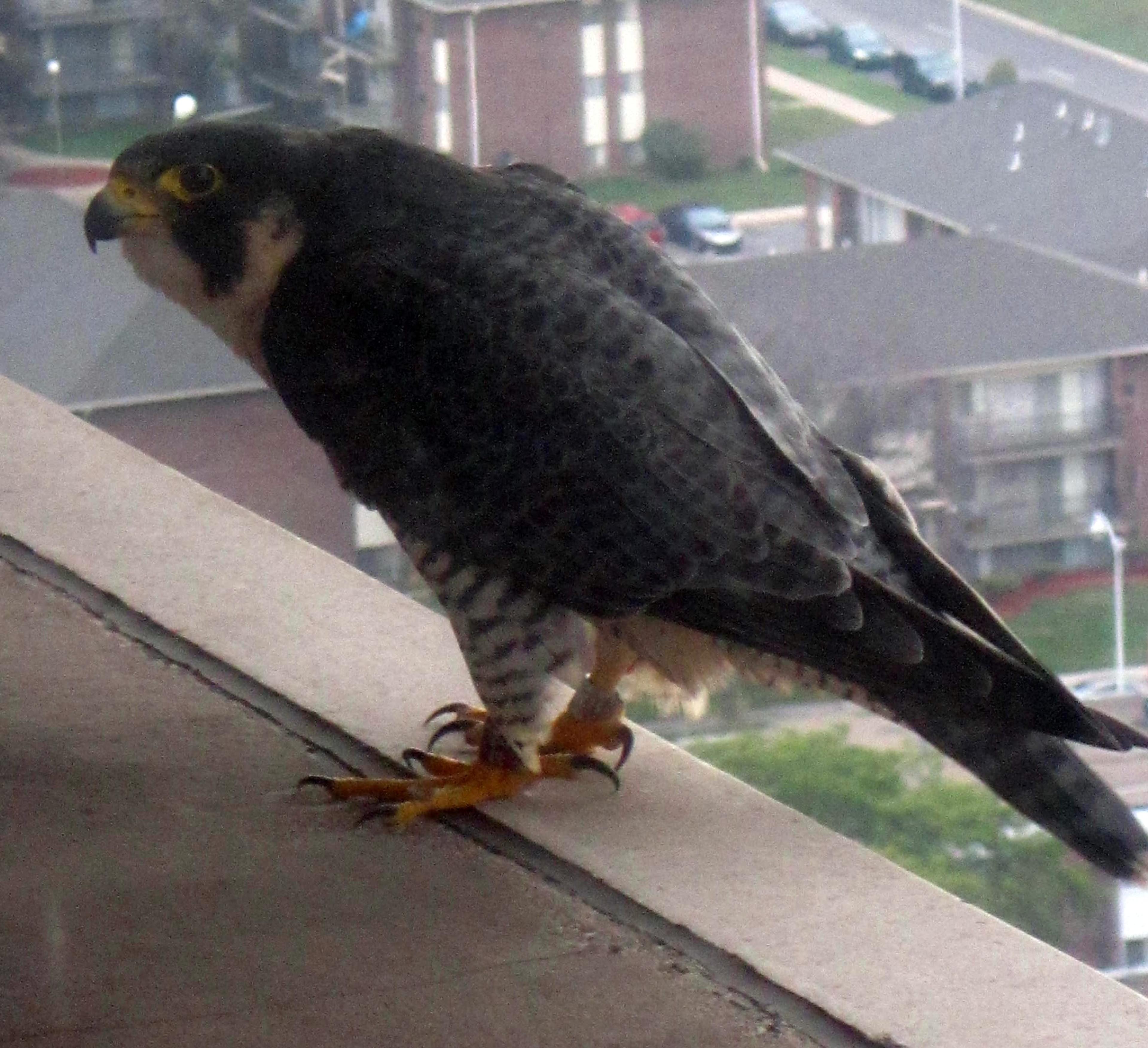 Tina Fenech and Nancy Breedlove are avid bird watchers who work on the 21st floor of the BCBSM headquarters building in downtown Detroit. Turns out that’s a pretty good place to spot peregrine falcons, a powerful bird of prey that was nearly wiped out in North America less than 50 years ago. Fenech took the photographs of the adult peregrine falcon(s) above and below and says the birds are frequent visitors to the cement ledge directly outside her office window. “He lands on the ledge, lets out this very loud screeching noise, hangs around for a while and then takes off,” she says of the image below, which she captured last week. “The birds usually come back to look for food, or if I’m really lucky they bring their catch to the ledge and eat it there.” The peregrine is the largest falcon in North America, measuring between 14 and 19 inches long with a wingspan of up to 44 inches — about 3½ feet. In the wild, they nest high above the ground on cliffs or ledges. In cities, they pick tall buildings free of human interference and feast on pigeons or starlings. Peregrines mate for life and are known to breed in the same territory year after year. The bird is a remarkable success story of recovery.
Once believed fully eradicated east of the Mississippi River due to poisoning from the pesticide DDT, peregrine falcons were placed on the endangered species list in 1969. But after aggressive restoration efforts by state and federal wildlife officials, the numbers steadily recovered. Christine Becher, the southeast Michigan peregrine falcon nesting coordinator for the Michigan Department of Natural Resources, says she’s now monitoring 16 nesting pairs in an area that stretches from Bay City to the Ohio state line and from Ann Arbor to Port Huron. Among the nesting locations in Detroit are the AT&T building, Fisher Building and First National building. This spring, the advertising agency Campbell Ewald discovered a nesting pair that hatched three eggs on its rooftop in Warren. “The DNR did not put them there,” Becher says. “They went there of their own accord. They’re wild birds that determined they wanted to nest on these buildings.” Becher said it’s likely the banded falcons from the nearby AT&T building are using Blue Cross’ building as an off-season hunting grounds, so as to protect the supply of food closer to their nest for the critical nesting season. Check out the peregrine falcon’s incredible aerial hunting technique in this BBC video:

One of the foremost Gothic architects of the time, Philadelphian Charles Klauder, was hired to design the tower. The design took two years to finish, with the final plan attempting to fuse the idea of a modern skyscraper with the tradition and ideals of Gothic architecture. The plans received strong resistance from the community and from some university officials, who felt it was too tall for the city.

Peregrine Falcons are NOT the largest falcons in North America. The Gyr Falcon is larger, and is found mostly North of my location in Calgary, Alberta. They will occasionally come to the outskirts of Calgary in deep winter, when temperatures further north are extreme and prey is somewhat scarce. A gyr falcon can take down a CanadaGoose. A Peregrine Falcon will not attempt that, though it will chase and yell at a Canada Goose that comes too close to a nest with eggs or chicks or about-to-fledge juveniles.

Thanks for the comments, everyone.

Wow, what a treat! Great pics and wonderful story. I am also an avid birdwatcher and these shots are the best. Thanks for sharing.

Great story! What an awesome thing to see!