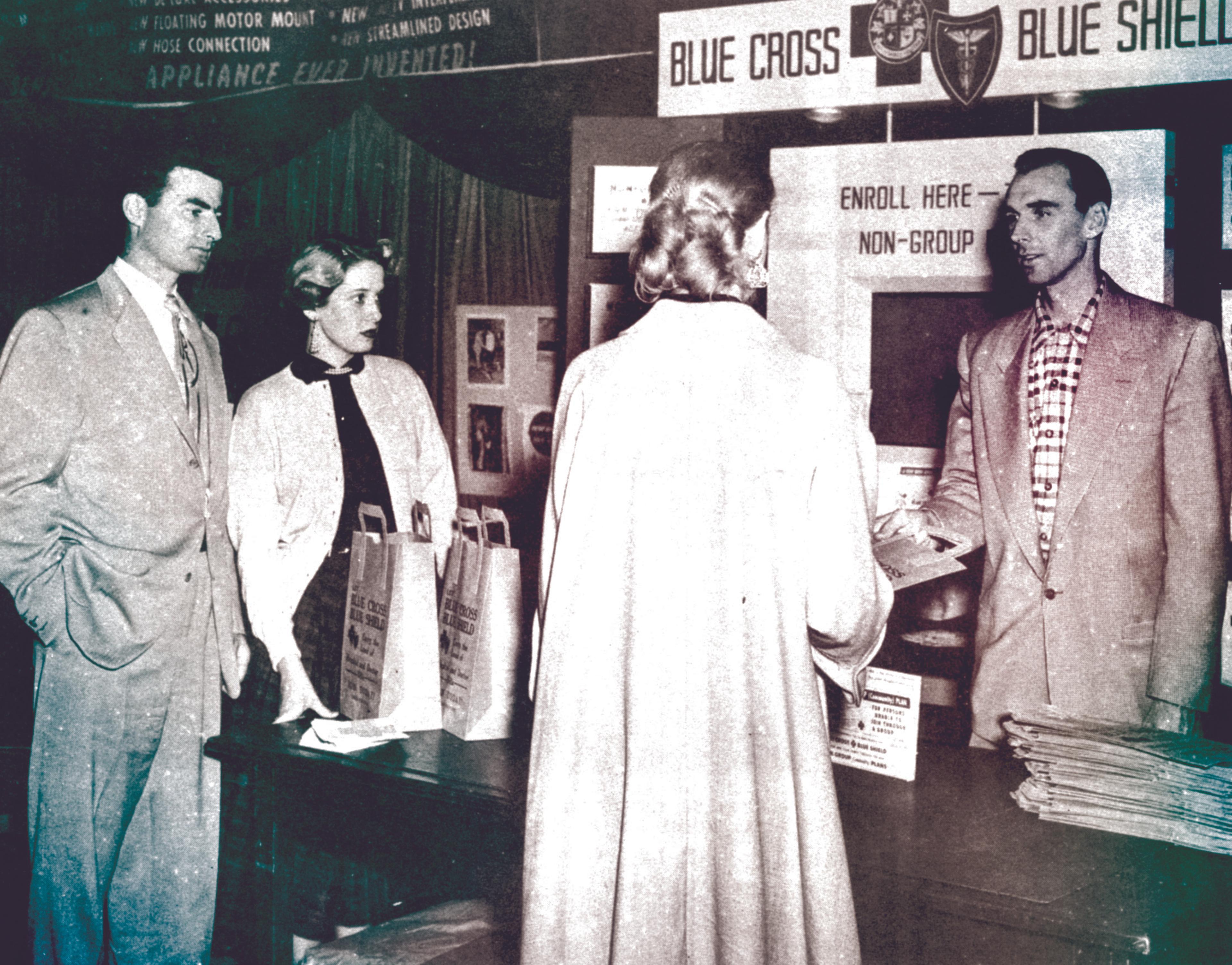 Josephine Evangelista has been a Blue Cross customer for almost as long as we’ve been a health insurer. The lively 97-year-old was born in 1921 in Italy and now resides in Redford. She’s enjoyed a lifetime of mostly good health, which she attributes to staying active. “Keep busy. Use your mind as much as you can,” she said.
She first acquired Blue Cross coverage in 1941 through her job. Then Josephine DeGeorgeo, she worked as a secretary in the guidance office at The Children’s Center in downtown Detroit. Her monthly premium at the time? A cool 75 cents. She put Dictaphone training in high school to good use. Social workers would record notes using the device and the young secretary would transcribe them. “The Dictaphone was what the laptop computer is today,” she explained. In the fall of 1946 she married Paul, a self-employed cement worker, taking his last name of Evangelista and his Blue Cross insurance coverage. The previous spring, Paul had returned from four years in the Army. While he was deployed, the couple corresponded through letters. Evangelista remembers a renewed courting phase before the wedding. “We hashed out our feelings about each other,” she said. “When he got out of the service, we had to get to know each other better.” The spark had survived time apart and the couple went on to have four children: Jon, Paul Douglas, Michael and Lori. Evangelista remembers a normal, happy family life with big Christmas Eve festivities including a family friend playing the role of Santa Claus and overstuffed pinatas filled with candy and coins that the children and their cousins took turns “whacking”. After raising her children, Evangelista went back to work in 1972 at Catholic Central High School. One of her job duties? Typing 800 report cards by hand. She served as a secretary at the school for 35 years until retiring in 2007 at the age of 85, with Blue Cross insurance coverage through the Michigan Catholic Conference. “My father worked until he was 80 and I beat him by working until I was 85,” she said with a laugh. During her tenure at Catholic Central, she lost her husband, who died in 2000 at the age of 78. Eleven months later, she’d lose her firstborn son Jon, to complications of multiple sclerosis. The back-to-back losses were hard on Evangelista, but she remained determined. She drove herself where she needed to go up until about two years ago. She suffered a blood pressure-related blackout when she was driving, which necessitated a pacemaker.
“I was a very independent woman before the accident happened,” she said. “I drove a car and I was independent.” Today, a friend picks her up six days a week for a breakfast club with friends at the local McDonald’s. A long life well lived has allowed her to enjoy the births of two granddaughters and nine grandsons, as well as six great-grandchildren. For 78 years, we’ve counted Evangelista as a Blue Cross customer and though it’s not something she thinks about often, the retiree has been pleased with her experience. “I’ve been happy with Blue Cross and Blue Shield, especially today,” she said. We've covered Michigan (and beyond) for 80 years and we're celebrating by giving thanks to partners who've helped us encourage better health for individuals and communities. Learn more here.
Like this post? Read these:
Photos of Josephine courtesy of her family; feature image historical to Blue Cross

What a nice story. It is good to read stories with positive and happy endings. She has been carrying the best card ever. BCBSM

Beautiful life story of a successful woman - thanks for sharing!

Jo is a living Saint. Her endless caregiving of her son and family and the love and kindness she shows to everyone she meets makes her one special lady! Great story!