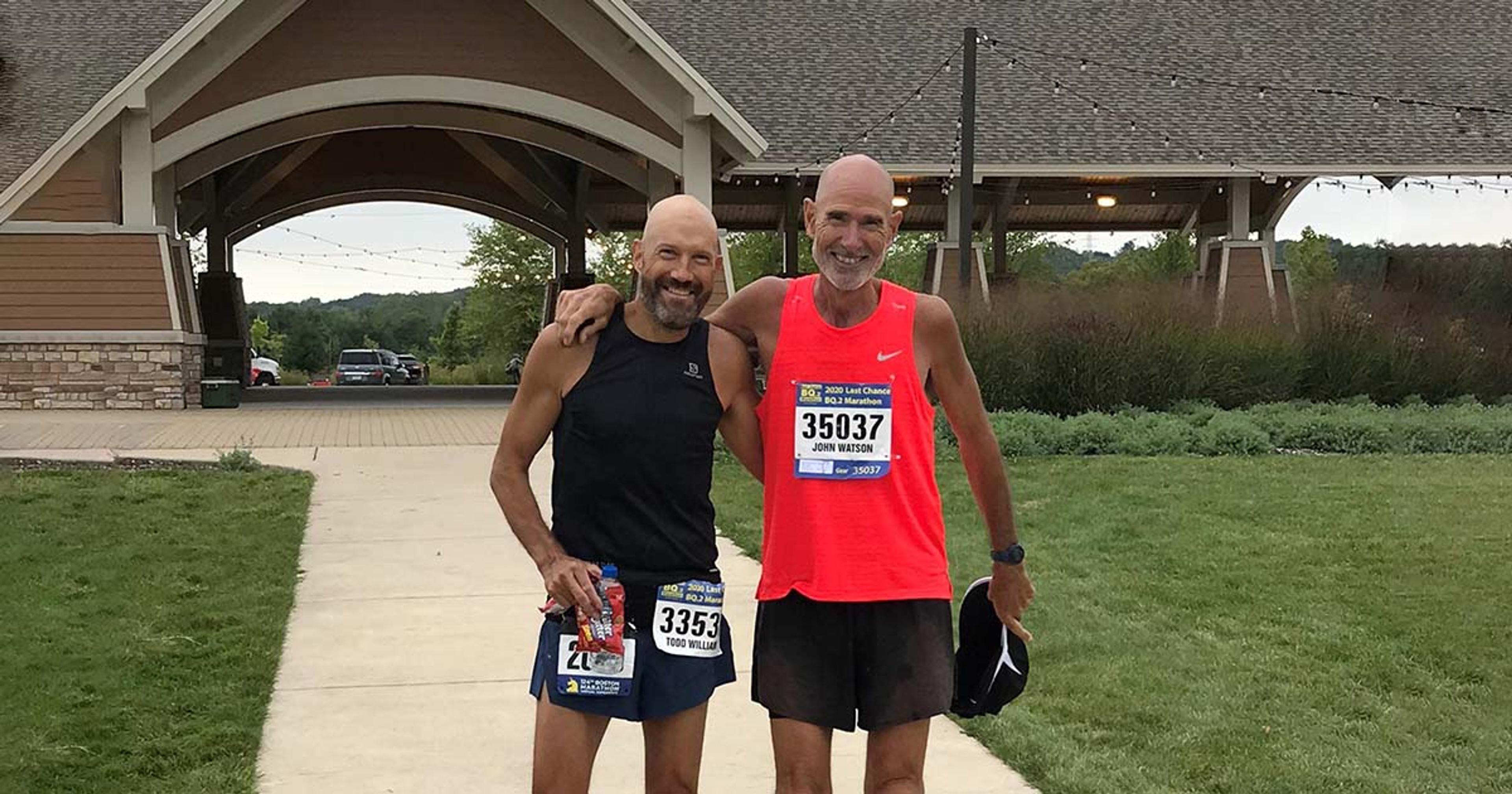 Nothing meant more to Coopersville, Michigan resident John Watson than running when he was a young adult. At his peak, Watson ran 100 miles a week between his regular workout routines and the various local and regional races he’d compete in.
Then in his early 30s, Watson developed left anterior shin compartment syndrome, a condition caused by overuse of the feet. His condition required surgery and a prolonged rehabilitation period. Reflecting now, Watson called it “a blessing in disguise.” As physically fit as he was, the other areas of Watson’s life were growing admittedly unhealthy. “I was out of balance with my family life, my work life and my social life,” said the 63-year-old Watson in a phone interview with Blue Cross Blue Shield of Michigan. “I always put running first. It caused friction in my relationships.”
A few years ago, after a 25-year hiatus to heal up and find that balance, Watson, a retired corrections officer, returned to competitive running only to have his passion ripped away from him again, this time by COVID-19 last fall.
“I keep a running journal. So, on Sept. 21 I went for a run and when I was done, I had a virus-type feeling and pains and aches in my joints,” Watson recalled. “Maybe a slight headache. The next day I ran again, and this time I really felt bad.”
Watson tested positive for COVID the next day and promptly scheduled a teleconference with his doctor.
“My wife is retired, but she was a (registered nurse) of 40 years,” he said. “The doctor gave my wife the criteria that I had to meet to keep me out of the hospital. So, my wife’s goal – around the clock, she was my nurse – was to keep me out of the hospital."
Watson’s bout with COVID was a tumultuous one. Bedridden for about a week, Watson said he was “scared to death.”  “I never feared death before. I’m a Christian, when I go to bed at night, I have peace,” Watson said. “During this COVID thing, I prayed, but I didn’t have peace. I didn’t know if I was going to make it. It was very severe.”
Thanks to the round-the-clock care of his wife, Watson was able to recover from the deadly virus. It wasn’t long before he was in his doctor’s office with hopes of being cleared to lace his running shoes up once again and hit the pavement.
Thought to be previously out of reach while he was sick, Watson planned to compete in the October 2021 Grand Rapids Marathon, which at that time was mere weeks away.
There, Watson hoped to qualify for the 2022 Boston Marathon, one of his lifelong goals. “I went to my doctor and he did a complete physical, examining my heart and lungs, and cleared me to get back into running,” Watson said. “My wife said, ‘If he doesn’t clear you, you’re not running,’” he recalled. “At that point I wasn’t even thinking of running, I just wanted to get back to running.”
Watson was diagnosed with bipolar disorder when he was young. Part of the reason he loves running so much is because of its therapeutic value, he said. “When you’re bipolar, running is like therapy and you miss that,” he said. “If (my doctor) wouldn’t have cleared me my wife would have held me to the fact that I couldn’t run.”
As a general rule of thumb, Johns Hopkins Medicine advises anyone who previously had COVID to wait at least a week without symptoms before returning to sports or fitness activity. A 2020 study based on returning to exercise following mild-to-moderate COVID-19 in recreational athletes recommends individuals with cardiac or heart symptoms remain inactive for 2 to 3 weeks post COVID. Those with myocarditis or inflammation of the heart are urged to take 3 to 6 months off a normal exercise regimen after recovering from COVID.
Watson’s doctor cleared him to run the 26-mile Grand Rapids Marathon, a race he completed in just under four hours and 37 minutes. Working his way back from COVID, his stamina was still a work in progress at that time and he did not qualify for the Boston Marathon, which bases qualifications on minimum finishing times per age group.
But considering where Watson was less than three weeks prior – in bed, completely debilitated – he felt like he walked away from the Grand Rapids Marathon as a winner. No matter how big a role exercise plays in your life, Watson advises anyone returning to physical activity after fighting COVID-19 to do so slowly.
“You really need to ease back into whatever your regimen was, pre-COVID,” he advised. “There’s people that walk, or they run on stationary cycles or run treadmills or whatever. But for any type of fitness program, you have to really, really be careful and ease back into it.” Watson, who said he’s grateful to run again, will compete in the Bayshore Marathon on Memorial Day in Traverse City. His sights are again set on qualifying for the Boston Marathon with a desired finish time of under 3 hours and 40 minutes.
By that time, he said, he knows his stamina and confidence will both be fully restored. “Here’s a little tidbit,” Watson shared. “When I do run Boston and I finish, I’m going to get a tattoo on my calf. It’ll say the date and it’ll have my time, and I’m going to do it in blue and yellow, the Boston colors.”
Photo credit: John Watson
Keep reading:

Thank you for this wonderful article about my brother John. I was truly scared about the severity of his health when he had Covid. He is such an inspirational runner but I was incredibly amazed that he could run a marathon so quickly after Covid. His wife Beth truly saved him from hospitalization We all need more inspirational stories like this