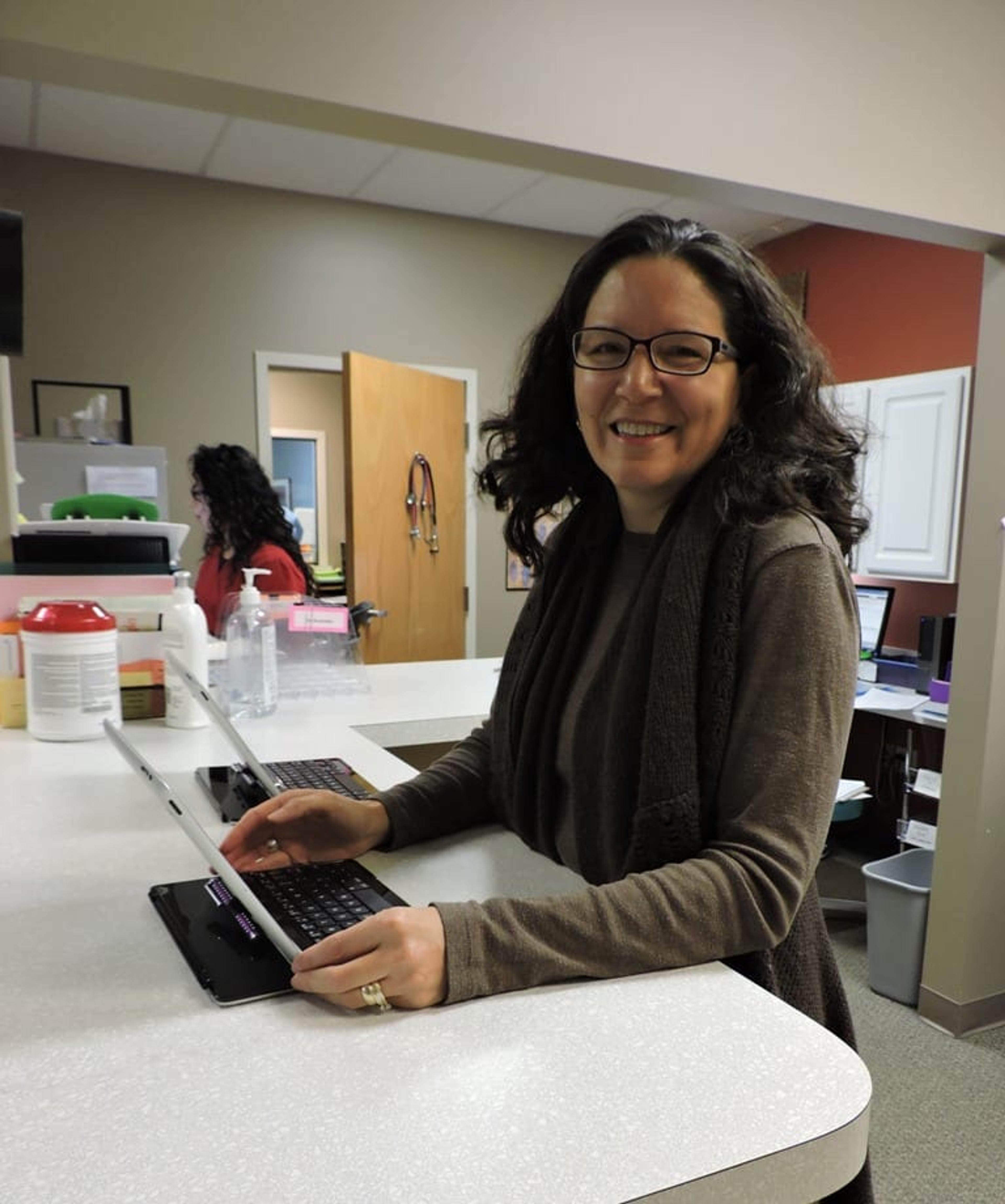 At Grand Rapids’ Health Intervention Services (HIS), every morning starts the same way. Before any patients are seen, before the hustle and bustle of the faith-based nonprofit health clinic is in full swing, staff and volunteers join together in a circle. They close their eyes, bow their heads, and pray. In these quiet, still few moments, they ask for guidance to serve the people who will soon walk through the doors. “I think it’s more for the staff to center ourselves and remember why we’re doing what we’re doing,” said Laura VanderMolen, Medical Director at HIS. For her, overseeing the treatment of underserved patients at the clinic can be simultaneously frustrating and rewarding, serious and joyful, turbulent and peaceful. Despite its contradictions, VanderMolen’s work at HIS, located in a low-income southeast Grand Rapids neighborhood, is exactly where she feels she’s needed. “I’m very happy where God has placed me,” she said. The staff and volunteers who work at the clinic are also happy VanderMolen has dedicated the past 13 years to HIS. They recently nominated her for a YWCA Tribute Award to recognize her efforts. VanderMolen accepted the 2014 Sports, Fitness, and Wellness award at a recent luncheon. Blue Cross Blue Shield of Michigan was a sponsor of the awards. “Her vision is that everyone has access to quality health care no matter of economic status, national origin, religion, age, or gender,” nominators wrote. “She has a heart for people who are struggling with cultural differences in the health care world.” She said it was humbling to be included with other esteemed award winners, but she was most proud that the nomination had come from the people she works with on a daily basis, who see her on good days and not-so-good days. “To me that was more of an honor, because they’re kind of like your family,” she said.

Growing up, VanderMolen took many trips to Peru, her father’s homeland. She said the level of poverty there deeply touched her. “That definitely opened my eyes to a place that didn’t have what we have in America,” she said. “It definitely taught me not to value material things.” Her parents further instilled values of compassion and service to others. She lovingly describes them as “earthy” and hard-working. After growing up poor in Peru, her father became a doctor. Her mother grew up on a farm and entered nursing. Along with their success, they instilled a sense of giving back. As a child, VanderMolen’s parents would ask her to give away not only clothes that didn’t fit to help the needy, but often encouraged her to part with possessions she still used and enjoyed. “They were always open to help people who were in need,” she said. “To me, that was just a very normal way to live.” VanderMolen’s father offered to pay for college if she attended Hope College, his alma mater, which is how the Baltimore-raised doctor found herself in Michigan. She said she’d always pictured doing service work overseas, but when the opportunity to work at HIS came up, she realized she could make an impact wherever she was called to be. The time in Michigan also led her to her husband, Kirk VanderMolen. The couple has four children together, ranging in age from four to 15. Kirk VanderMolen is the national director of Love in the Name of Christ and both are very committed to raising their children in a hands-on fashion that will hopefully lead them to be compassionate and service-oriented adults. “We have a very similar passion for people,” VanderMolen said of her husband.

At the clinic, VanderMolen oversees more than 100 volunteer doctors, nurses, and medical assistants. Many of the patients who come in for routine medical care, dental visits, and counseling sessions would be classified as working poor – struggling to make ends meet with no benefits despite working many part-time jobs. Most are in their 30s, speak Spanish, and have incomes that are below 200 percent of the poverty level. “I’m inspired by my patients, who on a general note have lots of obstacles, but they still figure it out,” she said. “They’re inspiring to me.” Volunteers and staff at the clinic also inspire her with their desire to offer care for those who desperately need it. “I don’t feel like I’m alone in my fight,” she said. “All of us will make it work for patients.” Selling colleagues on volunteering at the clinic isn’t hard, VanderMolen said. Many like the idea that they can volunteer and do some good, while maintaining regular contact with the people they treat. She said on mission trips to other parts of the world, you don’t get to see the outcomes of the people you treat. “It’s like a mission job in their backyard,” she said. The clinic records about 1,000 patient visits per month. They pay $20 to be seen, and $15 for lab work if it’s needed. Staff at the clinic work to make sure patients can afford prescribed medications, taking advantage of pharmacy programs that offer lower-cost prescriptions and sometimes partnering with neighborhood pharmacies willing to cut them a deal. “We try to use as many resources in the community to keep costs low,” VanderMolen said. “It takes those kinds of community connections to be able to do what we need to do.”

The Need for Service Continues

The clinic has seen changes since the passage of the Affordable Care Act. Donations are harder to come by as many people assume that the legislation means everyone has insurance and services provided at HIS are no longer needed, VanderMolen explained. Blue Cross recently awarded HIS a $15,000 safety net grant. The clinic offers ACA counseling to help patients understand how to sign up. If patients now qualify for Medicaid under the legislation, the clinic will still take them. For those still unable to afford or qualify for care, the clinic is there to help. “Our goal has always been to be a safety net, so it still fits our goal,” she explained. Because the needs are often greater than what the clinic can provide, VanderMolen said people sometimes go out of their way to help patients – bringing in clothes, extra durable medical equipment they aren’t using such as crutches, and just generally going above the call of duty. “Staff many times will get personally involved and if there’s a need we can fill, we’ll fill it,” she said. It’s not a perfect system and VanderMolen has learned that she can’t solve all her patients’ problems, a fact that was frustrating to her at first. Still, she’s glad HIS is able to keep the doors open and that she has a job that allows her to serve and help others. “If I wasn’t here, they would get even less,” she said of her patients.