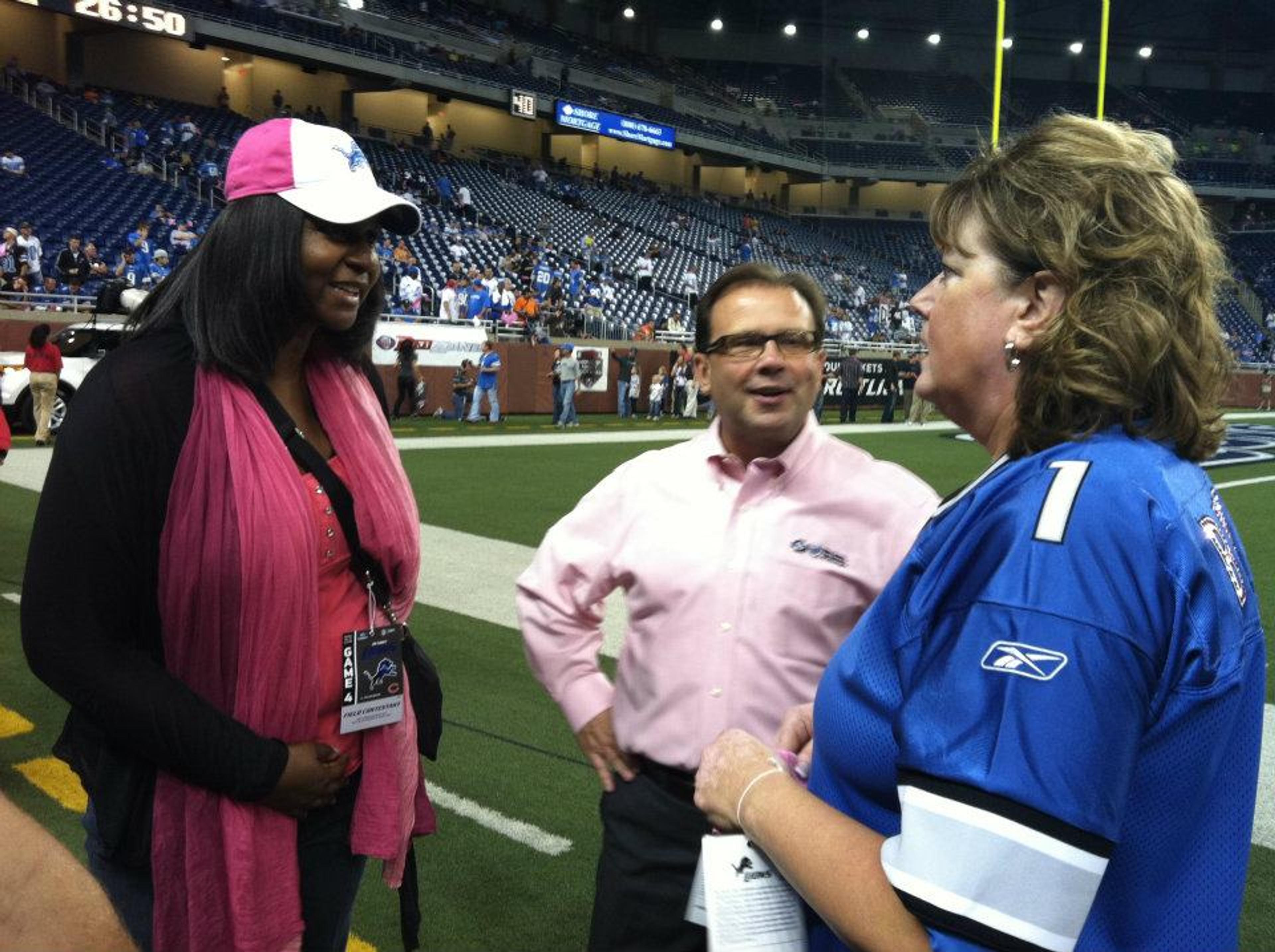 Ford Field underwent a pink-out as the Detroit Lions beat the Chicago Bears 24-13 in a nationally televised Monday Night Football game. Many spectators in the crowd of 67,861 — a Lions Ford Field record — waved bright pink “Curable” towels that Blue Cross distributed in honor of Breast Cancer Awareness Month. The Blues also presented a $10,000 donation to the American Cancer Society before the game. Below is a roundup of news coverage about the promotional event and a slideshow of photos from Ford Field. And don't forget to share your story of surviving breast cancer at Making Strides on A Healthier Michigan.
WXYZ-TV reporter Smita Kalokhe: “Now it is all about the Honolulu blue, but it is also all about pink today. Very important message that we are sending here and let me tell you, real men wear pink.”
Detroit News: The Curable Towel, modeled after the Pittsburgh Steelers' Terrible Towel, will be distributed free to the first 50,000 fans at Ford Field, who will be encouraged to wave them on national television to advocate for breast cancer awareness, the National Football League's pet cause in October. It also is the first marketing hit for a new Metro Detroit fundraising effort.
The towel makes Detroit stand out, said Stephen McDaniel, an associate professor at University of Maryland and a consumer psychologist who studies sports marketing and fan behavior.
"This is so unique because in addition to the players sporting pink, now the fans are involved," he said. "Teams are always looking how to enhance the fan experience, and this satisfies that in a big way, plus it's tied to a worthy cause."
Freep: As part of Breast Cancer Awareness Month, Blue Cross Blue Shield of Michigan will supply 50,000 bright pink towels to fans inside the downtown Detroit stadium for tonight's game.
The towels are meant to raise awareness about the importance of breast cancer screenings. Fans are urged to wave the towels during the nationally televised game.
Crain’s Detroit Business: Blue Cross Blue Shield of Michigan is supplying 50,000 bright pink towels as part of a partnership between the Lions and the health insurer. Both organizations will honor breast cancer survivors. The Blues also will make a $10,000 donation to the American Cancer Society.
[slideshow]

I was thinking the same thing!

I agree with Sandy!

It would be so nice if every BCBSM employee could recieve a "Curable Towel" for breast cancer awareness.

I was so proud to be part of an organization that set such a great tone for the national viewing audience to see Monday night with the pink towels. I was at the game and the feeling was almost euphoric and very emotional to see the sea of pink towels (knowing what it represented)and the great play from the Lions. My family talked about how "cool" the towels looked and how the players looked just as good with their pink on. All I can say is GO BLUE. Lions and BCBSM. :)

I am proud to work for such a wonderful company!