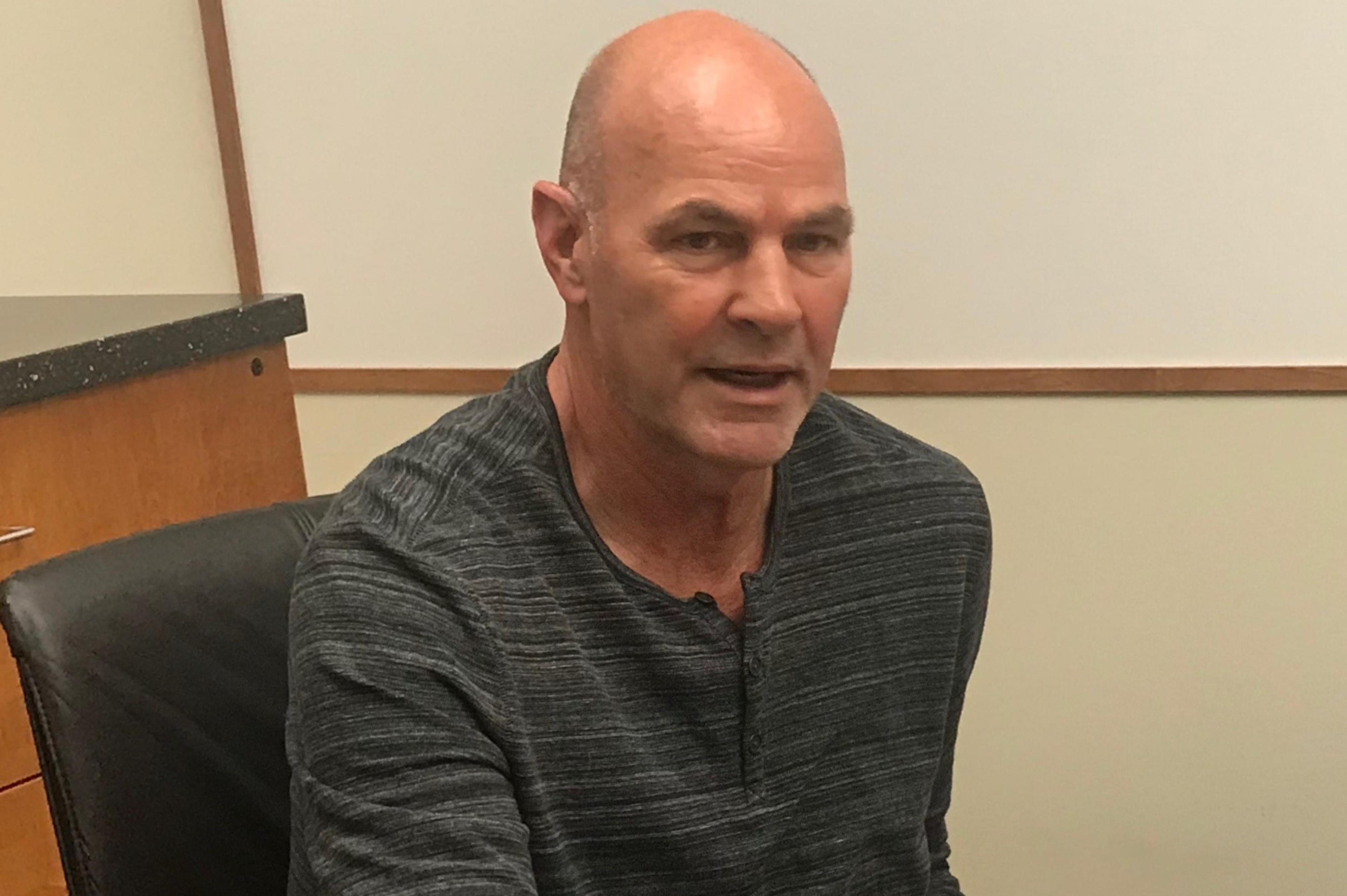 - excerpted from the poem "Smaller” by Andy McDowell
For Kirk Gibson, a simple poem helps to explain a disease that is sometimes difficult to put into words. After his 2015 Parkinson’s disease diagnosis, life did slow down for the baseball great. But the same focus and determination that propelled the slugger to two World Series titles, one as MVP, is fueling a new drive to end Parkinson’s disease and help those living with it.
Kirk Gibson as a Detroit Tiger. A neurodegenerative brain disorder, Parkinson’s disease can present as rigidity, slowness of movement and oftentimes tremors. About one million people in the U.S. have Parkinson’s disease and there’s no known cure although many people with it respond well to dopamine-replenishing drugs. Taking on the disease is not a mission Gibson is taking on alone. He recently announced that The Kirk Gibson Foundation for Parkinson’s is partnering on a year-long campaign with the Michigan Parkinson Foundation and Blue Cross Blue Shield of Michigan to increase awareness of the disease and fund clinical research. These types of collaborations are key when it comes to the massive undertaking required to beat the disease, Gibson explained. "If you want to win the World Series, whatever that may be in your life, it’s not going to happen by yourself,” he said.

In 2015, Gibson was set to begin a new career chapter as an on-air game analyst for the Detroit Tigers, a place that should have felt like home after two stints with the team as a player. Still, on opening day, he was uneasy going into the broadcast booth. “I felt anxiety like I’d never felt it and it was not a good feeling,” he said. He locked up, unable to finish the telecast and he knew he needed to seek help. “That was my tipping point. ‘There’s something more going on with me’,” he realized. Gibson had chalked up a series of symptoms – his hand clutching up while shaving, a stiff and painful neck, a left arm that felt glued to his body, even a slight limp – as aftereffects of a long, physical career filled with wear and tear on his body. He even had surgery for what was believed to be a pinched disc. “It was real subtle at first and then over the next seven years or so, I began to have more and more symptoms,” he said. Gibson sought the attention of a neurologist and movement specialist in Grand Rapids. Two days after his “tipping point”, he had a diagnosis: Parkinson's. “It was crushing,” Gibson said. “I thought I was going to die, I just didn’t know how long it was going to take.”

A new normal with no shame

Gibson is not the type of guy to sit in the corner and sulk. Despite missed opportunities for earlier treatment, now that he knew what was causing his symptoms, he could get to work. “If you know what you’re up against, you can design a plan of attack,” he explained. The disease was affecting the right side of his brain more significantly, which was causing the left side of his body to react. Movement and voice therapy helped him adjust to better coordinate his movements. He wanted to use his star power and celebrity status to be a light for others struggling with Parkinson’s Disease. While a lot of people feel shame or stigma because of the diagnosis, Gibson said he wanted to let people know right away, to spread the message that there’s nothing to be embarrassed about. “I felt that it was a relief to just come clean and let everybody know what I’m dealing with,” he said. He expanded the mission of his existing foundation to help find a cure for Parkinson’s Disease and to help others through their journey. “We’re looking for a cure, yet we’re looking to help people be more comfortable and understand their disease before we have the cure,” he said. “It’s not the end of a rewarding life.”

Using his connections and resources, Gibson is committed to getting more people on board to end a disease he faces daily. Life with Parkinson’s is exhausting, he said, but he gets a lot of personal satisfaction by giving back.
Kirk Gibson up to bat when he played for the Detroit Tigers. It’s a worldview he attributes in large part to Hall of Fame manager Sparky Anderson, who he worked with as a Tiger. Anderson imparted to a young Gibson that if you’re not doing something the right way, it’s probably not worth doing and that he had a moral imperative to give back – to his fans then and in general to live a good, purposeful life. Anderson’s words sunk in over the years. “It’s more rewarding to give back than it is to take, in my view,” Gibson said. “If I can help one person, I just feel better doing that.” A fall fundraiser – the culmination of the partnership between the Michigan Parkinson’s Foundation, BCBSM and Gibson’s foundation – is planned for Oct. 19 at the Motor City Casino. Blue Cross CEO and President Dan Loepp, along with his wife Amy, will serve as executive chairs for the gala, titled “Everybody vs. Parkinson’s”. Loepp’s father, Robert, died from complications from Parkinson’s making the mission important to him personally. “Amy and I are proud to support these two extraordinary foundations and bring awareness to Parkinson’s, a devastating disease that has impacted so many families, including mine,” Loepp said. Both foundations will benefit from the evening and Gibson is grateful for the collaboration and people working to make the night a success. “People like Dan and Amy are what inspire me and many others to be great teammates, so we’re honored to have them as our chairs,” Gibson said.

If you liked this post, you might also enjoy:
Photos courtesy of The Kirk Gibson Foundation for Parkinson's

My husband was diagnosed of Parkinsons disease 2 years ago, when he was 59. He had a stooped posture, tremors, right arm does not move and also a pulsating feeling in his body. He was placed on Senemet for 8 months and then Siferol was introduced and replaced the Senemet, during this time span he was also diagnosed with dementia. He started having hallucinations, lost touch with. Suspecting it was the medication I took him off the Siferol (with the doctor’s knowledge) him on PD natural herbal formula we ordered from TREE OF LIFE HEALTH CLINIC, his symptoms totally declined over a 3 weeks use of the TREE OF LIFE HEALTH Parkinson's disease natural herbal formula. He is now almost 61 and doing very well, the disease is totally reversed! (w w w. treeoflifeherbalclinic .com)

My husband was diagnosed of Parkinsons disease 2 years ago, when he was 59. He had a stooped posture, tremors, right arm does not move and also a pulsating feeling in his body. He was placed on Senemet for 8 months and then Siferol was introduced and replaced the Senemet, during this time span he was also diagnosed with dementia. He started having hallucinations, lost touch with reality. Suspecting it was the medication I took him off the Siferol (with the doctor’s knowledge) him on PD natural herbal formula we ordered from TREE OF LIFE HEALTH CLINIC, his symptoms totally declined over a 3 weeks use of the TREE OF LIFE HEALTH Parkinson's disease natural herbal formula. He is now almost 61 and doing very well, the disease is totally reversed! (w w w. treeoflifeherbalclinic .com)

Hi Bill, that’s challenging news to hear. Make sure you give yourself time to process the diagnosis. In addition to learning more about the disease, it’s probably time to see a specialist in Parkinson’s. If you need assistance finding one, call the number on the back of your insurance card or talk to your current health care provider. Here’s a good place to start to learn more about what your next steps should be.

I have recently been diagnosed with Parkinsons and don't have any idea where to go or what to do about it.